Is that a pasty in your pocket or are you just happy to see me? 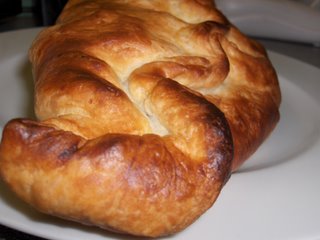 I've often thought about the traditional Cornish Pasty. Legend has it that one half would be meat and potato and the other half fruit(I know that you know all this). And of course the crimped edge is for the miners to hold with their dirty hands and would be thrown away (shame that, I wonder how many couldn't resist and ate the crimp anyway?). I never see a pasty for sale with these two courses. Mind, I haven't traveled extensively through Cornwall.
Anyway, I did it. Two thirds of the pasty is thinly sliced pork,onion,potato, swede and carrot with salt and pepper and a bit of flour and water. The other third sliced apple and sugar.
It was terrific and the two sections melded together nicely. Which made me think of the obvious: pork and apple, duck and cherry, chicken and mango. hmmm, I think I'm on to something here.

Life at home is fine but not us really. So I'm going back to work in four weeks time. We are preparing Mamma's boy, expressing and the Hubby giving him a bottle. It's working too, after 3 days the boy woke up from a nap and as Dad was there he was looking to him for a snack. Cool.
And speaking of Mamma's milk, am I punishing the boy with a painfully windy tummy because of my healthy diet? You know, high fibre, lots of fruit and veg and pulses? Would he have a calmer time if I was eating junk food?
Posted by foodteacher at 9:03 pm