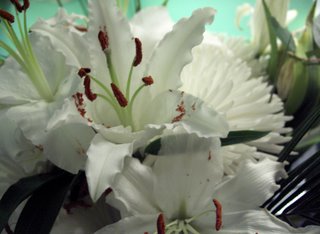 Well, I've been on maternity leave for a week now. A time for adjustment to say the least.
The last days of school were hectic but wonderful. Everyone made me feel like the homecoming queen, I had so many flowers in the house that it smelled like a funeral parlour (the white lilies especially) and the chocolates! Yum!
Especially nice were the gifts and cards from the pupils. Three pupils had their mums knit outfits for the coming baby.
But enough of that syrupy sweetness.
Hometime has been a different story. It's been a week of my husband adjusting to me being around and... I'm sure a lot of you have suffered the same fate, anytime one gets a holiday or about to take an extended period of much needed rest, this is the time one is struck down with a vicious cold. I actually started to feel better about Wednesday and then the Girl fell ill on Thursday night. This is quite a shock to our systems, cause she is NEVER ill. Just a few days before my friend was asking me what the doctors thought about the Girl being a vegetarian. That's when I realized that she hasn't actually been to the doctors since she decided to go veggie at the age of 5. So there's an endorsement for the lifestyle.
Speaking of lifestyle diets, my husband read this article
about veganism and suggests that perhaps we should become vegans. A typical response from me is to run with that idea and figure out what would have to change in our shopping etc. to become vegan. Which is what I do. Now, what I really should know by now is that he's only thrown the idea up for debate, he doesn't really know the first thing about what it would entail. My first clue to his lack of seriousness should have come the next day when we were out and about and he bought himself a ham and egg sandwich. But I was going for it.
So the weekly shop on Friday. I buy vegan cheese, vegan margarine, soya milk, no meat and so forth. Within minutes of getting home with it, I knew that I could never live as a vegan. My sense of what food is and should be runs contrary to this. And I'm not against animal husbandry. So it would never work. The vegan cheese was disgusting and The Girl will not eat bread and margarine. So back to our mostly vegetarian diet for us.
I have produced pretty standard fare this week, except for my experimental pineapple upside down cake. I was trying to make something vaguely healthy that might entice the Girl to eat again. It probably would have work, but I think the texture of the poppy seeds were off-putting for her. This is what I used in the cake: 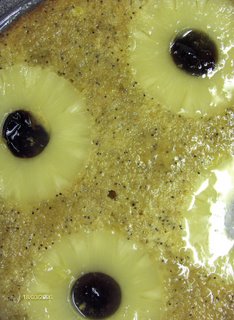 The Girl was feeling much better today, so we worked together to make this bunny for the soon to be arriving sibling. I used the pattern from this cool website: 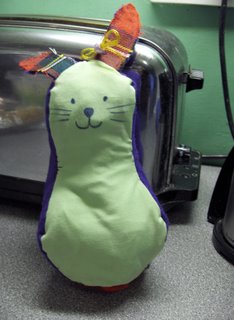 wee_wonderfuls
And if you are wondering, we've got an estimated two and half weeks before the new arrival. But I'm betting on an early appearance. Just a gut feeling as it were.
Posted by foodteacher at 9:04 pm