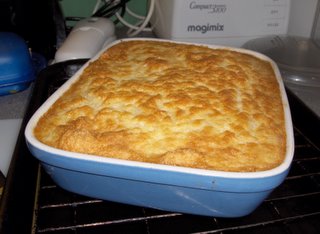 The Girl came home after having tea with a friend raving about this pudding. I had never heard of it and asked for the recipe. Made it on Sunday. It is a really nice pudding and easy to make. I'll put the recipe at the end.
I am in that awkward limbo time of waiting to finish work and having this baby. Two and a half weeks left of work and I'm busy tying up loose ends, i.e. doing all that marking that I should have been doing for the last two months. Everyone was nervous as to how my job would be filled. Four months without a trained Food Technology teacher is a long time for kids and for colleagues. They wouldn't be able to cook and this would not be good. It's like a drugs fix to some of them.
Well, the issue has been seemingly solved. A fellow called up and basically told the head teacher that he was having the job and at top pay rates. No interview as he is currently in Mauritius. He sounds a bit cheeky and we're all a bit nervous about it, but no one else applied and he is qualified after all. watch this space.

Peel and slice apples thinly. Melt butter in pan and fry apple for a few minutes. Tip apples into dish. Sprinkle on sugar and nutmeg. In a bowl, beat egg yolks and crumbs, add cream and mix. Whisk egg whites utnil stiff. Fold into cream mix. Pour over the apples and bake about 25 minutes.
Posted by foodteacher at 8:24 pm