After a long week, some smoked paprika 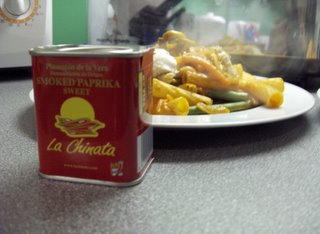 After a long week, working hard and fantasizing that I'm one of life's real go-getters while really getting no where (I mean, why exactly am I trying to do a job whose success depends on sixteen year olds actually doing something????), it's nice to come home and just give up. I stripped off and got into bed and enjoy a bit of dwaming (a Scottish word that means dreaming while half awake) for a half an hour while the baby in my tummy bounced around. I then got up and decided that it was time to use the Spanish smoked sweet paprika that I had to buy the other day. So I cooked chicken breasts and pasta with a paprika and creme fraiche sauce. It was very good.
This morning's practical was extremely satisfying because it defies many of the rules of what supposed good teaching is, but everyone was happy and nothing went wrong. A small class of what are considered 'low ability' pupils and half of them managed to bring their ingredients in, which is expected. What 'low ability' often means is lack of money, lack of organisation, and a very narrow view of the world (including what food should be) which is necessary for their survival.
The five that did have their stuff made cheese and bacon puff pastries. I had loads of help too, the technician, the learning support assistant and his friend who was visiting for the day to see if she was interested in training to become a LSA. So us adults all had a coffee while we worked. And rather than writing the instructions on the board (no point, they either can't or wont read it) I demonstrated each stage of the process with a different kiddie's stuff. We all really enjoyed ourselves, even the kids that were having to sit down and do some book work.
Highlight of my week really.
Posted by foodteacher at 9:23 pm