I was making the bread rolls on Tuesday, while the Girl and the neighbourhood kids were playing out in the back yard. In comes one of the neighbour boys, asking as he usually does, if he help me cook. I don't think I've ever met a kid that wasn't interested in cooking. Now, the boy (aged 7) is special for a few reasons. He's got celiacs disease and he's a food phobic. He also has other issues, but what is really important is that he is an absolutely lovely child.
So, because of the gluten, he couldn't help me with the bread making. But he stuck around and I talked through the process and he wanted to touch the salt and sugar, so I poured some out for him, then he got to dissolve it in water and oil. By this time the Girl and another neighbour were in the kitchen, trying to push their way in. The kitchen is very tiny and there is only one step stool, which they all tried to stand on to get to the counter. I had to send them all away to play outside again. But the boy asked if I could get some gluten free flour so that he could bake something with me. 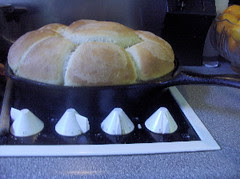 His normal diet is potatoes in many forms and fake custard (Historians will consider Bird's custard powder the greatest symbol of the Empire's downfall one day) But I'm convinced that I could get him to eat more. But that is me fantasising somewhat I know. And, yes, I've bought the flour, we'll be making some fairy cakes this weekend.

My theory about why kids are fussy eaters is that they use it to gain control over their lives. What do you all think?
Posted by foodteacher at 10:04 pm