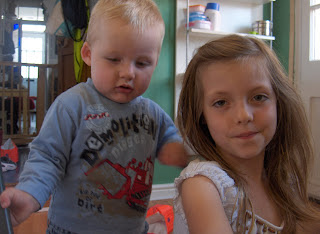 It was yesterday when we started planning for bread and butter pud. Mum had just asked me what I wanted for pud tomorrow and I had answered 'can we try bread&butter pud?"
'sure' said mom. She reached out and took down a rather large recipe book from the shelf careful not to drop it on E.J. who was playing with pots and pans right under neath her. after that book was unsuccessful we tried another and that one was. now enough of all that stuff that was how it started.and this is how it was ended and ended was it. 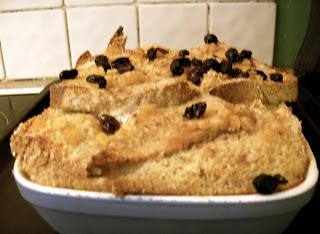 now of course you'll be wondering what happened all that wont you? [it includes a lot about me being poked in the eye with a bamboo stick, and having to put an ice pack over it.]we got out all the bread and stuff and we started making the pudding. after that we put marmalade and butter and laying out the bottom layer of the bread we started putting the apples and raisins in. then we had to put the egg in using sieve[I don't under stand it either].It was basically over by now and we just had to put it in the oven and that was soon done.it turned out delicious and I had it in my lunch the next day
Posted by foodteacher at 7:57 pm

Beautiful children! And the bread and butter pud looks pretty good too :)