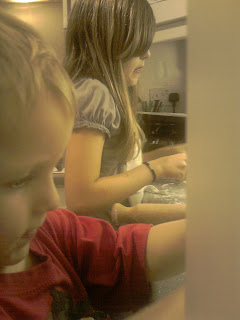 Back to work... harsh.
I'm getting better at letting the kids cook. Mamma's boy is a baker and loves cornbread. Really loves cornbread. The Girl's spicy black bean soup was the bomb! As I may have stated before, if you are planning on letting the kids cook, make sure that you tack at least an extra half an hour onto the planned making or make sure it isn't crucial for the next meal.
First day back at school:
We compared homemade rough puff pastry to bought and I demonstrated a cheese and onion jalousie with the two pastries.
In the afternoon I had the pupils analyse pot noodles in groups and then I showed them how to make a much better 'own' version. They liked own version best. (thank goodness)
Posted by foodteacher at 11:05 pm

Hi I hope you can help me! I read your blog and am so appreciative of what you do. Your writing is clear, descriptive and always interesting. Can you help me get my website out to everyone you know? I am determined to head to culinary school after I graduate college this year, but money is kind of non-existent. I put the website together to source donations...it's just crazy ehough to maybe help defray the costs...Thank you for your help! http://getmetoculinaryschool.weebly.com

I’m writing to you from ITV’s Britain’s Best Dish. I’ve just had a look at your blog, and you sound like you’d be great on the show.

We’re currently searching for potential contestants for our upcoming series. In case you haven’t seen the show before Britain's Best Dish is an annual competition hosted by ITV for amateur cooks. In it we look for Britain's best starter, main course and dessert. The winner of the competition gets their hands on a £10,000 cash prize.

We’ll be holding our regional auditions on May 16. As you are clearly a keen foodie you are just the sort of person we are looking for so if you are at all interested in taking part or know anyone who may be interested and haven't already featured in the Best Dish studio finals, please email ASAP with your name, contact number, and where you're from to bestdish@itv.com and we’ll be in touch soon.