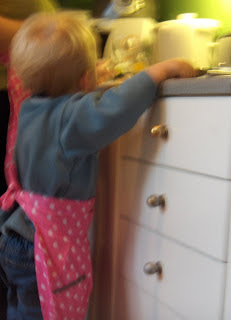 So many words I speak all the time, I get fed up hearing them, as others are. That is why schools have half term breaks. But when I'm away from it, I immediately need it again.
It's been a difficult September, not something I want to talk about, as you know. But I do want to remember the positives.
One of the boys in one of the year 11 GCSE classes hunts with his Dad. He asked if he could bring in rabbits. 'I'll skin them outside the classroom". Visions of kids fainting in the classroom block opposite made me giggle inside. I suggested that that may not be the best idea. 'Defrost them tonight and peel 'em in the morning before you bring them in.' OK Miss.
He brought in the rabbits, his own homemade sausage meat with apple, his own equipment and sourced a sharp knife, which just doesn't exist in the food rooms. He worked diligently in his corner (the kids choose an area and stick with it) and was the star of the day. Kids managed to come out of other classrooms to see the rabbits and see him work. He made rabbit burgers. The girls in the class, who were wary and incredulous of him at the beginning, decided to try to the burgers and loved them. That could possibly be one of the best days of that kiddie's school life. Thank goodness I didn't stop it from happening.

At home and within me:
Mamma's Boy, as you can see above, is barreling on ahead into toddler hood. Has a sheer bloody-mindedness that is just breathtaking and I loath to have to try to control it for him, but if I want to get anything done or have sanity I have to. Realized this week that if I want to be a really super-duper parent, I should plan out the days as if it were school. Hhmm... instead, how about cbeebies and a cup of coffee????
Modern parenting (lordy, I hope others feel like this, or I'm really crap) is all about what we should be doing. Every minute needs to be accounted for. Every need, current and future, must be sorted out. I just can't do it.

The Girl is marvelously 8 going on 16. We are currently plotting her costume for the School Halloween Disco. We have ambitions of winning. Wish us luck.

Hubby bought a slow cooker and we both have cooked marvelous things in it. And today he made his first loaf of bread. He's missed the home baking so much, that it has motivated him to learn how. It was so sweet (sorry to be so saccharin) to watch him and his nervous self doubt throughout. And the pleasure of being able to point out to him that the boy, who is very discerning, was devouring the results. So, yes, it was a good loaf. Please make more.

And finally, the diet. I've kept the weight off, am in control of what I eat. I even seem to be off the plateau and have lost weight this last week without really trying. I've hit 39 and may actually be happy with my physical self at last. Is that allowed?
Posted by foodteacher at 8:58 pm