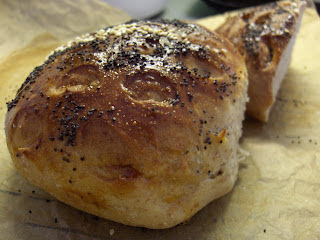 O.K. Thought of the day (one that has occurred to many before me, I'm just a bit slow) and it's one I've mentioned before. Why do we have to 'treat' ourselves all the time? The constant bombardment of coffee, chocolate, flowers, personal grooming items that offer so much more, cards, gift wrapping, plastic wrapped hollow easter eggs. In everyday life I've been reducing, not in a eco-warrior one day I'll get a medal sort of way, but reducing. But, but, but... along comes Christmas, Easter, Birthdays and I feel forced into the brainwashed purchasing collective that is Western Society. I can't even believe that I still allow my daughter to 'believe' in the various mythical characters. I keep thinking she's just going to naturally give it up, being eight and usually shockingly logical and politically minded (she is investigating the Green Party after all) but then two days ago she casually wonders what the Easter Bunny will bring this year. Perhaps she believes that if she divulges her true understanding, the gifts will stop. I never believed in Santa and the Easter Bunny because my Mom was studying with the Jehovah Witnesses when I was very little. When she re-married when I was four, the concept was introduced and we went along with it, being the greedy little mites that we were.

It's all so frustrating.

I'm going to try, very slowly this will take some time, to give up chocolate. It really is unnecessary and generates so much negative stuff with it. Slowly so that it doesn't become a self-sacrificing nonsense.

D-word update: 13 lbs. almost a British stone. This is going well and ties in nicely with my desire just to consume less and feel better. Though, annoyingly after this conversation, weight loss has made it necessary to buy new clothes and then I went crazy a bought these to help with my hip and joint pain. I love them and don't plan on buying another pair of shoes for a very very long time. So there you go, contradictory and I shouldn't even dream of preaching.
Posted by foodteacher at 8:35 pm