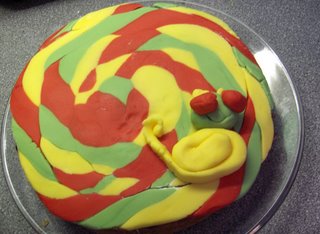 A house full of four girls can be quite unnerving. Especially when we have spent the last five weeks alone with just one who has had her nose stuck in a book the whole time. But it was a good way of getting used to idea of back to work on Monday. To survive such afternoons, no matter how casually planned and put together, it is always wise to have food presented as a picnic or party spread and always, always have a DVD ready. The Girl and I made the cake which would be the centre of the picnic. And Hubby thoughtful planned ahead last night and picked up a funny movie.
The Girl had been wanting to make a cake that looked like a giant lolly pop for the last two weeks, so I had bought some coloured ready to roll icing. We had to roll it flat to get it to fit the cake, and we liked the results. The Girl added the cat (yes it's a cat) for a bit of flair and to use up the icing.
We took extra care with the sponge and it's the best I've ever made. I weighed the eggs, used the best quality cake flour, the zest of a lemon, a touch of vanilla, and a dash of milk. I glazed it with some homemade blackcurrant jam and applied the icing. Ready to roll icing tastes horrible you know. So the adults peeled the icing off of the cake and enjoyed it with a nice instant coffee.
We watched Kicking and Screaming, the Will Farrow film. I don't know about the girls, but I thoroughly enjoyed it. But they are not American and therefore have never had the Little League experience. It was especially poignant for me as my mom took over as our Little League coach after our first and very disastrous year. But that is another blog completely isn't it?
Posted by foodteacher at 11:00 pm