Holiday? Feeding and going back to work 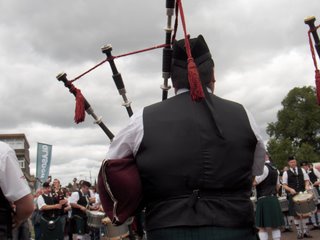 Are all family holidays stressfull? Is it a public secret that no one wants to admit too? We have come back from Scotland a week early because we just couldn't bare it anymore. The weather, the lack of clean, dry clothing, driving around to every known relative so that they can see the new baby. Or should I say, see the new baby as he did that territorial thing of needing to feed the minute we walk into a new house and then spit up all over me and him and their white furnishings? The Girl was clever and found an escape in the discovery of the Harry Potter Books. She barely spoke for days on end as she read and re-read them. Something up there that I was consumming disagreed with Mamma's Boy (the water?) because the spitting up stopped when we came back home.
Because of all that and my concerns about going back to work in a week and a half, I had decided to start Momma's boy on formula. Quite frankly, I was getting a bit fed up with getting the ole' knockers out in front of everyone. And that made the thought of spending my break and lunch times in a closet expressing just unbareable. 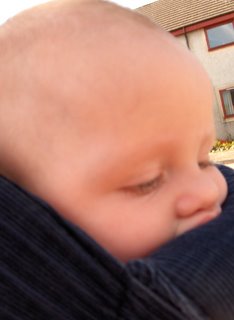 Now that I'm home and we've both settled again, I'm having second thoughts. We've also started him on baby rice. I know the guidance now is to leave it to six months, but Mamma's boy weighs a hefty 21 lbs. 6 oz., is incredibly strong and is showing all the signs of being ready, including going mental when we eat and waking two and three times in the night to feed. I know he's more interested in the process of putting spoon in mouth, so we are taking it slowly.
I've been doing a bit of googling about breastfeeding vs. formula and of course it all tells me what I already know, that I should continue for as long as possible. But my job this September is going to be very different, more stressful, and I want to get it right, so that I'm more employable in the future. Both things are important. So I'll try to not jump to any quick changes and see how things go.
GCSE results were out today, and that's made me really anxious too. (Sorry, I'm not supposed to winge on this blog) My Food groups historically don't do as well as they should and I most definitely get judged on that. It really gets me down, so I didn't go into school to see the results just yet. The group I had was on the C/D border, so it was crucial for the school's results that they got the C's and not the D's. I was on maternity leave during the revision time, they didn't take their work home to study, and I'm not too confident.
Posted by foodteacher at 9:49 pm

I failed at breast feeding and this is years before formula powders. My babies formula was 1/2 evaporated milk, 1/2 water and a small amount of karo syrup...that's what homemade formula is. You could increase the syrup if the baby was constipated, reduce it if the stool was runny. The water was boiled and the equiptment sterilized. When my milk suddenly dried up my mother came over and showed me how to make it...my children are grown women, healthy and hardy. It was a disappointment but it wasn't the end of the world. My oldest daughter is a LL nurser and I think that's fine. But one of her children was colicy and later developed diabetes...it wasn't the cause but it didn't prevent it either. Do what makes the most sense to you and your situation and don't feel guilty.

thank you for your comment. I never knew about homemade formula, but of course there would be. With all the press now, one would think that breastfeeding was the magic bullet that cured all modern illnesses and malaise. Or is it a clever way of putting the blame on the mother for everything?