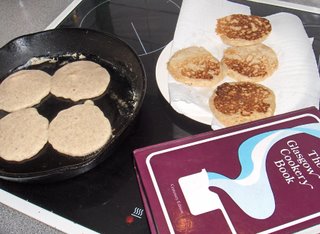 I've decided not to tell the birth story in any detail, it's a food blog after all. Thank you to the commentators below, by the way your sites are cool.
Mamma's boy is thriving, eating and sleeping well. Isn't amazing that we can produce food for another human being? Just because that is the way we are built?
A few days after getting home from the hospital, I was up and baking up a spinach and cheese filo thingy for lunch. Then it happened again, my oven broke down. Aaarrgghh. Hubby took it all apart again, but I finally convinced him that we would be better off buying a new one. I managed this without hurting his manly pride I hope. I'm not a believer in that whole, me man, me fix things nonsense. Some inanimate objects just don't want to be fixed.
So until we get the new one sorted out, I'm without oven. Which means I'm cooking even less than I planned to. Frustration. So I'm relying on my trusty cast iron skillet once again and traditional griddle recipes to keep me sane. Today, a crumpets recipe from the Glasgow Cookery Book circa 1974, a gift from my Mother in law and it is really cool. I've also mastered Welsh cakes (secret is to keep the heat fairly low . It is a dense mix and needs time to cook in the middle before the outside is burned.)
Mamma's boy keeps me dancing too. He is on the same eating schedule that we are on. So when he sees me eating, he has to latch on too. With both hands tied holding him, I've eaten a lot of cold meals these last two weeks.
But nevermind, it's temporary in the scheme of things. It's hard to accept that I'm not going to be able to go straight back to my old schedule for awhile. With feedings, healing, no driving, no school, and not much money we have to work at remaining positive. Wow, what a whinge session! And it's not really that bad, I'm a very lucky person and I know it. And thank goodness that I can cook good, cheap food from basic ingredients. A great skill to have and one that should be promoted more in Food Technology classes, don't ya think?
Posted by foodteacher at 3:34 pm